Award Winning music artist – King illest & HipHop Heavyweight rapper – Slapdee are well known not to be in good terms. In short, its safe to say they are rivals😅😅. King illest is well known to have taken some direct jabs at Slapdee frequently. Recently, King illest even  claimed he was initially supposed to feature on Slapdee’s “Mother Tongue” album on a song titled Mali. He said Slapdee took off his verse for obvious reasons. If you have followed this rivalry between King illest & Slapdee, you will also recall King illest once said Slapdee got murdered on his own song.

Yesterday, King illest was responding to some questions from fans on instagram. He was asked by a certain fan as to when he was going to collaborate with Slapdee. His response to the question was quite teasing. His response was “Tomorrow“. 🤔🤔 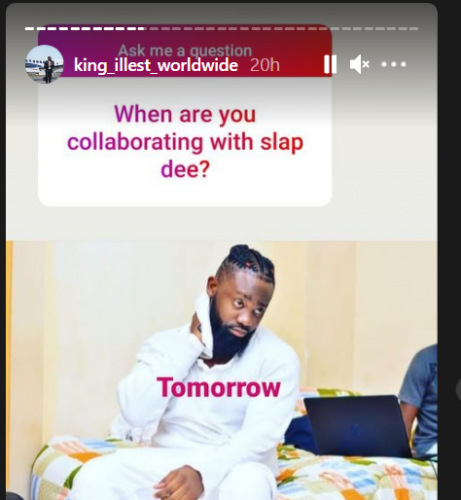 However, he disclosed he would possibly collaborate with Macky 2 again. The two artists – King illest & Macky 2 have collaborated before on a song titled Ba cheende. The song was also nominated under “Best Hip Hop/Rap Song” at the Kwacha Music Awards.