. He was born in Luanshya and later moved on to Ndola. Dj Kayrody personality can be described as a versatile & creative person or rather Versatility, Creativity and Flexibility

behind decks are the best keywords describing the talent of Dj Kayrody.

Dj Kayrody was at Chiwala Technical School where he did his secondary school from the year 2008 to 2012. He later on did his Tertiary Education at Mulungushi University where he obtained a degree in Economics. 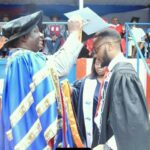 His shared a stage with artists such as Chef 187, Drimz, Afunika and many more. Not only is he a maverick on the decks but An Economist by Profession.

You can contact Kanyanta Hansende or better known as Dj Kayrody using his facebook username which is @DjKayrody. You can also contact him for other business related issues using his email [email protected]

Slapdee's album "Mother Tongue" Will Have A Deluxe Version