X.Y.Z Entertainment recording rapper & performer – Robert Chunga popularly known as Bobby East is definitely one of Zambia’s prominent artist. The rapper has been one of the few victims to be hit by imposters, whereby imposters make fake accounts on social media & swindle money from people.

He has alerted so many people about this trend by imposters. This morning, Bobby East posted on his Facebook page where he said people are still getting swindled by fake accounts & added up asking why he would randomly text someone to send a K250. Check post below.

Guys, I'm kind of tired of saying this but I'll repeat for the ones at the back… A lot of you are getting swindled by…

An unknown artist from Tanzania then commented on his (Bobby East) post that he was swindled money by him in 2017. The artist disclosed that the K350 he was swindled by Bobby East was for featuring him on a song. He says he told Stevo about it & later on did a song with Stevo titled Another Level.

Bobby East responded to the artist where he said if it was K350 he was offering, he deserved to be swindled, he added up saying unfortunately it wasn’t him who swindled him the money. Check screenshot below! 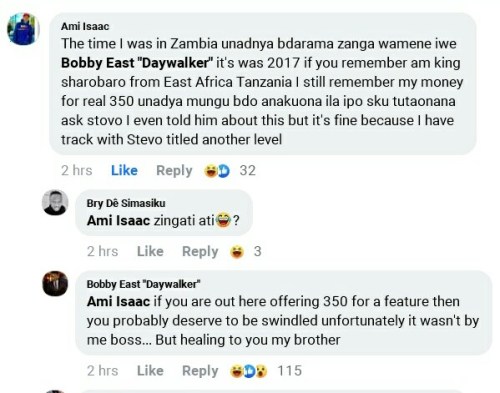 Mac MjaYz ft. K Mulla – You Made It Easy